– The 33-year-old will take home £200,000 every week at Old Trafford despite joining them for free

– Only De Gea, Pogba and Martial are above him when it comes to the highest earners at the club

Edinson Cavani will earn a staggering £200,000-a-week after joining Manchester United on a one year deal on transfer deadline day.

The 33-year-old joined the Red Devils on a free transfer following the expiration of his deal with French League champions Paris Saint Germain.

United shifted focus to the Uruguay international after failing to secure the services of their major target.

SunSport reports that the former Napoli attacker is among top earners at Old Trafford with only David De Gea, Paul Pogba and Anthony Martial earning more than him on a weekly basis. 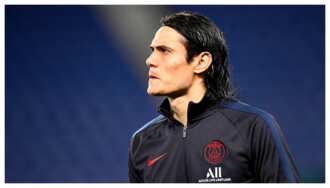 Interestingly, despite his significant impact since his arrival in January, Bruno Fernandes does not feature among the top 10 highest earners.

Dean Henderson completes the top 10 list after the keeper penning a huge new deal with the Manchester club on his return from Sheffield United where he was on loan.

Here are the top 10 highest earners at Man United:

The Sheffield-born football star is the current highest goal scorer across all competitions in Europe’s top five leagues this campaign.

‘I Would Rather Die In Battle’ – Anthony Joshua Speaks