Unknown gunmen have shot at the vehicle of a member of the House of Representatives, Nicholas Garba Sarkin Noma

– The spokesperson for the PDP in Kaduna, Abraham Alberah Catoh raised concerns over the attack

A member of the House of Representatives, Nicholas Garba Sarkin Noma reportedly escaped death when gunmen opened fire on his vehicle.

The spokesperson for the Peoples Democratic Party (PDP) in Kaduna state, Abraham Alberah Catoh, said the attack occurred along the Kwoi-Fadan Kagoma road on Saturday, October 3, The Sun reported. 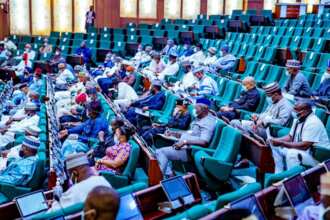 Sarkin Noma was fortunate to have escaped unhurt. Photo credits: House of Representatives

According to Catoh’s account, the lawmaker and other occupants of the car came out of the vehicle unhurt, but the car was riddled with bullets.

The PDP spokesperson raised concerns over rising insecurity in Kaduna state and urged the government to secure the lives of residen.

The party said the insecurity in the state shows that security agencies are not living up to their responsibilities.

“The party feels strongly disappointed that security agencies are not living up to their responsibilities. We call on the security agencies to be more proactive in their duties and go after the criminals so as to avert future occurrence of such ugly incidence.”

Catoh stated that criminal activities have been going on in Kaduna state unchecked.

He said the attack on the member of the National Assembly has raised questions about the security challenges the common man on the street is facing.

In another report, some unknown gunmen have reportedly killed a traditional ruler in Plateau state.

Four other people were also killed in the attack which reportedly happened in Wereng community, Riyom local government area.

The gunmen were said to have attacked the community in the early hours of Tuesday, October 6